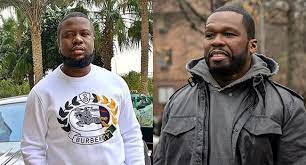 The ‘In da Club’ Rapper responsible for other hit tracks from his debut album in 2003 ‘, Get Rich or Die Trying’, shared pictures of the notorious fraudster on his Instagram page.

50 Cent, also the G Unit Records CEO, wrote, “For my scammers, I gotta do this one, Hushpuppy series coming soon! (GLG)GreenLightGang, I don’t miss it.”

It is the second time in two years that an American filmmaker would indicate interest in shooting a film around Hushpuppi’s groundbreaking internet fraud.

In August 2021, EbonyLife Studios, a Nigerian production company owned by media entrepreneur and filmmaker Mo Abudu, announced it acquired the rights to produce an action thriller based on Hushpuppi.

Ms. Abudu, who broke the news on Instagram, said EbonyLife Studios would partner with Will Packer Productions to develop an untitled project based on a Bloomberg article, ‘The Fall of the Billionaire Gucci Master’ by Evan Ratliff.

The status of the proposed film project is not known as both parties have yet to share updates.

Nonetheless, 50 Cent’s remarks have once more heightened anticipation among Nigerians, with Nollywood stakeholders urging him to allow a Nigerian with a Nigerian accent to play the titular character.

As happy as Nigerians were under his comment section, some asked to be cast in the series, and others requested that the rapper use Nigerian talents to bring the best out of the Movie.