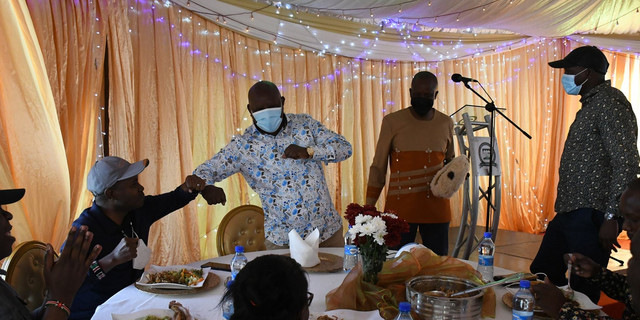 Kega, whose real name is Simon Mathenge, had invited the country’s senior leaders among them former Vice President Musalia Mudavadi to celebrate the transition of one of his sons into adulthood.

Imani Mathenge recently completed his primary school and scored 408 marks and in line with Kikuyu tradition, he was taken through the rite of passage into adulthood.

The night party which also included governors, MPs and other politicians raised more than Sh5 million in an impromptu fundraiser for the foundation that was named after the legislator’s son.

“The Imani Mathenge Foundation was founded with a singular purpose of assisting bright but less privileged children in Kieni Constituency pursue their education.

“We raised over Sh5 million in an impromptu fundraising drive which will be used to educate needy children to pursue their dreams,” Kanini Kega announced.

Despite being a private event, politics took centre-stage where the speakers criticized the nullification of the Building Bridges Initiative Constitution of Kenya (Amendment) Bill, 2020.

The politicians were in agreement that as the government challenges the court ruling at the Court of Appeal, Parliament should also think of reintroducing the amendments through a parliamentary initiative.

The spontaneous fundraiser was conducted in just 20 minutes, with highest contribution being Sh500,000 from Kesses MP Mishra Kiprop.