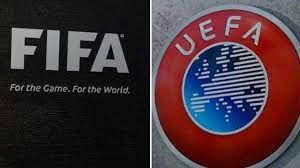 In a joint statement with European football body UEFA, FIFA confirmed that Russian clubs and national teams had been banned from competitions “until further notice”.

The decision comes after the International Olympic Committee (IOC) had urged bodies to exclude Russian athletes and officials from international events.

The IOC said the move was needed to “protect the integrity of global sports competitions and for the safety of all the participants.”

The decision allowed FIFA — football’s governing body — to exclude Russia from the World Cup ahead of its scheduled qualifying playoff on March 24.

Spartak Moscow had been scheduled to play next week in the Europa League against German club RB Leipzig, but have now been banned. Russia’s women’s team has also been banned from this summer’s European Championships.

The moves are not unprecedented, as FIFA and UEFA expelled Yugoslavia from its competitions in 1992 when war broke out in the Balkans.

Sports bodies and clubs across Europe have already moved against Russia amid the war in Ukraine.

UEFA has now also broken its deals with the Russian gas company, which sponsors both the Champions League and the European Championship.