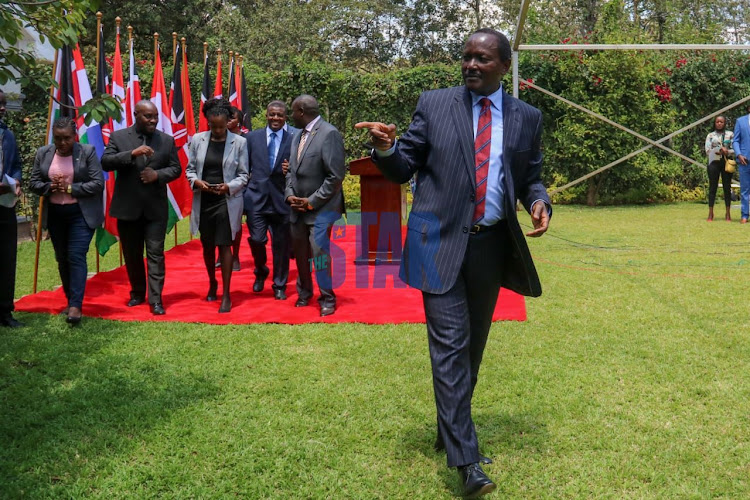 It’s unfortunate that this kind of language is being employed in an election where each vote counts. I doubt that Raila will win the presidency if Kalonzo doesn’t support him. Kalonzo exposed a secret deal with Raila that was unknown to the other former NASA principals.

All they knew was that ODM and Raila in particular wouldn’t appear on the presidential ballot in 2022, regardless of the outcome of the 2017 presidential election results.

The inference was that the other principals would find a formula for any one of them to be the flag bearer in 2022.

If Kalonzo is accusing Raila of mistrust and betrayal, he’s guilty of the same to the other principals.

In fact Wiper Party reserved OKA for Kalonzo but tried to lure other party leaders, pretending that it was an open field.

He confirmed this position when he revealed that he had promised MDVD running mate position. It’s this realisation that led MDVD and Weta to bolt out.

However, Raila’s arrogant response to Kalonzo’s expose is unwise and will deny him votes from Kalonzo’s close to one million voting bloc that he’s moves with wherever he goes since 2007 elections.

Raila shouldn’t bank on Uhuru’s support, thinking that the Mountain vote is already in the bag. The Mountain’s bogeyman tag on Raila is historical and goes back to the nineteen sixties.

The unnecessary response to Kalonzo sends fears that the Enigma will be his own man and trash the Coalition of Political Parties Act.

It’s a scaring message to Uhuru himself who mooted and signed the Coalition Bill into law to tame Raila or whoever wins the election through a Coalition.

It’s reason Raila is branded as an Uhuru or State project. Yet, Kalonzo’s support of ALUM is informed by his promise to be Uhuru’s errand boy whenever he needed him. Uhuru wants him in ALUM to support Raila.

The ODM response is making Uhuru’s task to bring OKA on board difficult. The Mountain will be forced to vote for KKA, not because of the love for Ruto and dislike of Uhuru.

It will be due to historical mistrust between the two prominent families that have controller the country’s politics and Raila’s intrusion into and dilution of the Kibaki and Uhuru presidencies through handshakes after causing the country to become ungovernable.