An aide-de-camp is a military officer whose role is mostly ceremonial; to give the presidency dignity and honour.

He is expected to follow the President whenever he goes out on official duties.

Kenya has had several  ADC  who started with the founding father of the nation, the late Mzee Jomo Kenyatta.

As ADC, Ngure was tasked with serving as the personal assistant to Kenya’s founding president and bringing the Head of State up to speed with what was happening countrywide.

In 1978 when the late and former President Daniel Arap Moi took over in 1978 with Major Macharia, a carryover from Mzee Jomo Kenyatta.

In his 24 years of presidency, Moi had a total of six ADCs.

Macharia was replaced by Major Peter Ngugi Ikenye who was followed by Colonel Wilson Boinett.

He was then followed by  Colonel Stephen Boiywo who retired with Moi in 2002.

According to Defence, the change is effected from time to time because of the career progression of officers.

The selection of Aide-de-Camp is normally done after consultation with the National Defence Council.

His successor, former president Uhuru Kenyatta continued with Col Mburu after he took over as Commander in Chief in 2013.

In his 10-year rule, Uhuru has had three ADCs.

Mburu in 2018 was replaced by Brigadier Timothy Stelu Lekolol from the Kenya Navy.

This was the first time that an ADC was coming from the navy.

The same year, Uhuru made history as the first Kenyan Head of State to have an assistant female  ADC  Rachel Nduta Kamui.

Lekolol was Uhuru’s ADC until September 13, 2022, when William Ruto ascended to power. 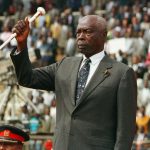