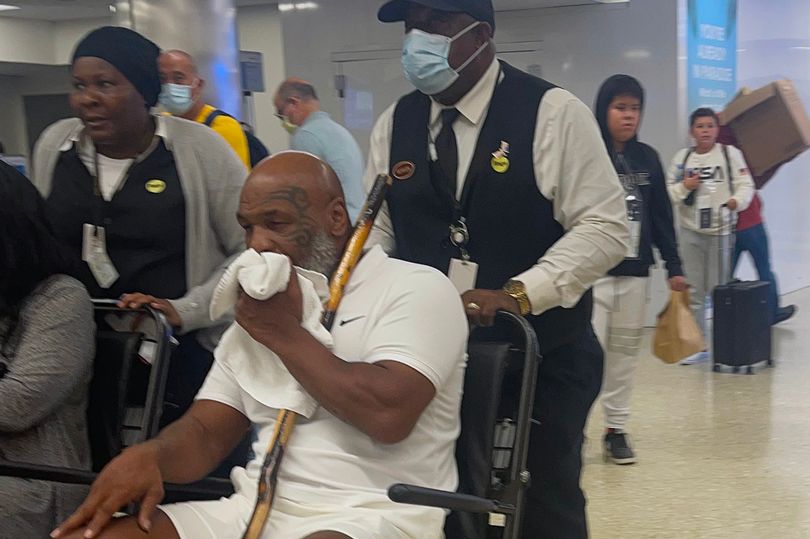 Mike Tyson the boxing legend posed for photos with fans as he was wheeled through Miami International Airport on Tuesday (August 16).

Two years ago he was bedridden for weeks to a similar episode. He was spotted walking around New York with a cane earlier this month, but it appears the current situation has worsened and has forced him to use a wheelchair.

But it’s all the more concerning after the 56-year-old made a worrying prediction about his life expectancy last month. Speaking on his podcast Hotboxin’ with Mike Tyson, he said: “Of course, we’re all going to die one day.

“Then, when I look in the mirror, I see those little spots on my face. I say, ‘Wow. That means my due date is approaching very, very soon.'”

Despite his belief that he doesn’t have long to live, Tyson is still associated with a return to action. He last stepped into the ring in November 2020 for an exhibition match against Roy Jones Jr.

Since then, the idea of ​​a fight with YouTuber turned-boxer Jake Paul has been played out. And it recently transpired that WWE star Bobby Lashley had had a chance to fight him.

Tyson has taken a break outside the ring in recent weeks after accusing streaming service Hulu, which reportedly produced their Mike series without his permission, of creating a “slave master takeover” of his life of him.