A signing that has been completed, with the Argentina forward joining Manchester City from River Plate in January. Welcome to the Premier League Julian.

A regular name in the gossip column and a striker undoubtedly attracting interest from a number of Premier League clubs.

The Benfica forward scored 34 goals in 43 games for his club last season, including six in the Champions League, and it is widely reported that he will move on this summer despite having three years left on his contract.

Chelsea and Manchester United have been heavily linked with the Bundesliga’s player of the season.

Newcastle showed an interest in the Reims striker in January and could well be one of a few Premier League clubs back in for the 19-year-old’s signature.

With his current Barca deal set to expire this summer and no sign of a new agreement being struck, the France international – is soon to be a free agent. 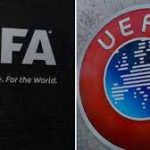