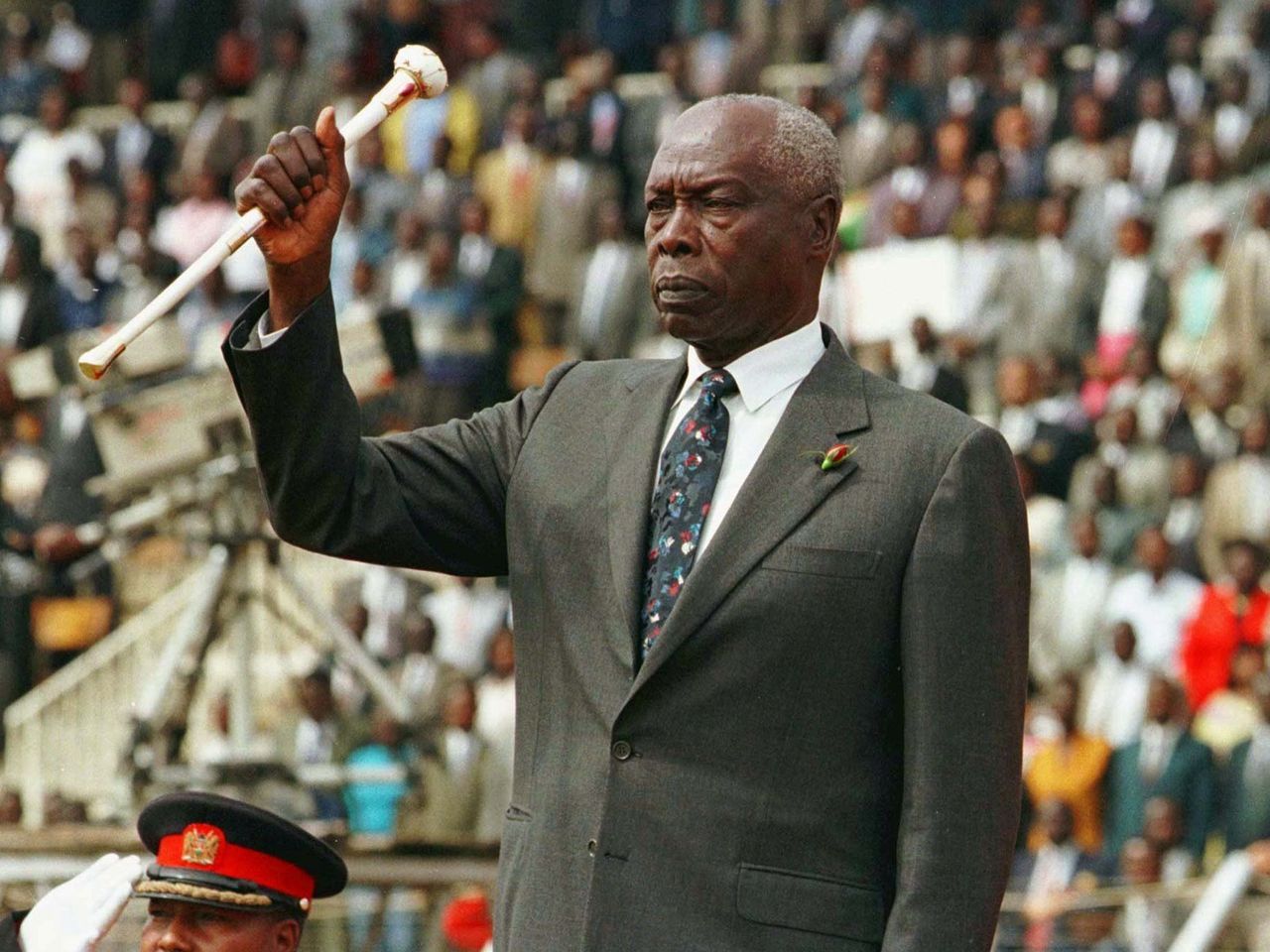 When Jomo Kenyatta died on 22 August 1978, Moi became acting president. A special presidential election for the balance of Kenyatta’s term was to be held.

This was to be on 8 November, 90 days later. A Cabinet meeting instead made a decision that no-one else is interested in running for President.

Various politicians kicked of a campaign across the country for Moi to be win unopposed.

He took office in as the second President of Kenya on 14 October 1978, as a result of the walkover electoral process.

In the beginning, Moi was popular, with widespread support all over the country. He toured the country and came into contact with the people everywhere.

Which was in great contrast to Kenyatta’s imperious style of government from behind closed doors.

However, political realities dictated that he would continue to be beholden to the system of government, that Kenyatta had created.

And to whose headship he had acceded, including the nearly dictatorial powers vested in his office. Despite his popularity, Moi was still unable to fully consolidate his power.

From the beginning, anti-communism was an important theme of Moi’s government; speaking on the new President’s behalf, Vice-President Mwai Kibaki bluntly stated, “There is no room for Communists in Kenya.”

The revolt hit a halt, mute by military and police forces commanded by Chief of General Staff Mahamoud Mohamed.

There may have been two or even three independent groups attempting to seize power at the same time.

for differing reasons, but the most serious was led by prominent Kikuyu politicians and members of the police and armed forces.

Moi took the opportunity to dismiss political opponents and consolidate his power. He reduced the influence of Kenyatta’s men in the cabinet.

This was through a long running judicial enquiry that resulted in the identification of key Kenyatta men as traitors.

Moi pardoned them but not before establishing their traitor status in the public view. The main conspirators in the coup, including Ochuka, got a death sentence.

This marked the last judicial executions in Kenya. He appointed supporters to key roles and changed the constitution.

This formally made KANU the only legally permitted party in the country. However, this made little practical difference to the political situation.

This is because all significant opposition parties were outlawed since 1969. Kenya’s academics and other intelligentsia did not accept this.

And educational institutions across the country became the site of movements that sought to introduce democratic reforms.

However, Kenyan secret police infiltrated these groups and many members moved into exile. Marxism remained illegal at Kenyan universities. The remaining opposition at home went underground.

The End of the Cold War

Starting in the late 1980s, Moi’s regime faced the end of the Cold War, as well as a national economy stagnating under rising oil prices. And falling prices for agricultural commodities.

Western governments also became more hostile to the KANU regime, a change of policy from the time of the Cold War.

They viewed Kenya as an important regional stabilizer, to prevent the spread of Soviet influence beyond Ethiopia, Somalia, and Tanzania.

During that time, Kenya received much foreign aid. And the country was stable, if authoritarian, regime with Moi and the KANU firmly in charge.

Western allies overlooked the increasing degree of political repression, including the use of torture at the infamous Nyayo House torture chambers.

Some of the evidence of these torture cells eventually exposed in 2003 after opposition leader Mwai Kibaki became President.

However, with the fall of the Soviet Union and a lessening need to counter socialist influence in the region, Western policymakers changed their policy towards Moi.

They increasingly regarded him as a despotic ruler rather than an important regional stabilizer.

They withheld foreign aid pending compliance with economic and political reforms. One of the key conditions imposed on his regime.

Especially by the United States through fiery ambassador Smith Hempstone, was the restoration of a multi-party system.

Despite his own lack of enthusiasm for the reintroduction of a multi-party system, Moi managed to win over his party who were against the reform.

Moi announced his intention to repeal Section 2(A) of the constitution, lifting the ban on opposition parties, at a KANU conference in Kasarani in December 1991.

Despite fierce debate and opposition from many delegates, the conference eventually passed the motion unanimously.

Despite the presence of opposition parties, Moi and the KANU returned to power in the first multi-party elections in 1992.

And once again in 1997. Both elections had evidence of political violence on the part of both the government and opposition forces.

Moi skillfully exploited Kenya’s mix of ethnic tensions in these contests, gaining a plurality in both elections.

This was through a mix of picking up votes across the country while his opponents’ support was more concentrated.

He attracted votes a wide of smaller tribes as well as the Luhya, and taking advantage of fears of Kikuyu domination over the non-Kikuyu majority.

In the absence of an effective and organized opposition, Moi had no difficulty in winning. Although there is suspicion that electoral fraud occurred.

The key to his victory in both elections was a divided opposition. In 1992 he polled 36.3% of the votes.

And in 1997 he received 40.4% but both were comfortable victories, due to vote-splitting between the various opposition groups, which failed to field a unity opposition candidate.

History judges President Moi harshly as a corrupt individual and kleptomaniac, and fairly so. His entire rule was marred with corruption that literally collapsed the Kenyan economy.

By the time his 24 year reign was coming to an end, Kenya’s economic growth was at its knees at negatives and 2%.

In 1999 the findings of NGOs like Amnesty International and a special investigation by the United Nations were published.

Her name is Mary Anne Fitzgerald from 1987–88. She says this resulted in her being vilified by the government and finally deported.

Moi was implicated in the 1990s Goldenberg scandal and subsequent cover-ups. Where the Kenyan government subsidized exports of gold.

This was far in excess of the foreign currency earnings of exporters. In this case, the gold was smuggled from Congo, as Kenya has negligible gold reserves.

The Goldenberg scandal cost Kenya the equivalent of more than 10% of the country’s annual GDP.

Half-hearted inquiries that began at the request of foreign aid donors, never amounted to anything substantial during Moi’s presidency.

The peaceful transfer of power to Mwai Kibaki may have involved an understanding, that Moi would not stand trial for offences committed during his presidency.

But foreign aid donors reiterated their requests, and Kibaki reopened the inquiry. The inquiry progressed.

Moi, his two sons, Philip and Gideon (now a Senator), and his daughter, June, as well as a host of high-ranking Kenyans, have been implicated.

Wangari Maathai discusses Moi’s actions during the 1980s and early 1990s in systematically attempting to dismantle the Greenbelt Movement.

This was after Maathai voiced displeasure at the government’s attempts to build an office tower in Uhuru Park.

And attempting to cut off funding from international donors by limiting funding through government sanctioned bodies.

Maathai also discusses Moi’s tactics during the beginning of the multiparty movement in the 1990s (see Forum for the Restoration of Democracy).

Moi announced the military would take over the government before the December 1992 elections.

Maathai received communication during that time that an assassination list had been drawn up, and noted the mysterious deaths of Bishop Alexander Muge and Robert Ouko.

The Release Political Prisoners party was also formed in the early 1990s to secure the release of political prisoners of the Moi regime.

And also to protest state-sanctioned torture and random imprisonment. The police dispersed the protestors.

Many of the mothers of these political prisoners camped at Freedom Corner in Uhuru Park on March 3, 1992.

After a yearlong vigil and hunger strike by many of the mothers of these political prisoners in the Anglican All Saints Cathedral near Uhuru Park, the government released 51 prisoners en masse in early 1993.

In October 2006, Moi was found by the International Centre for Settlement of Investment Disputes, to have taken a bribe from a Pakistani businessman.

The bribe was to facilitate an award a monopoly of duty-free shops at the country’s international airports in Mombasa and Nairobi.

The businessman, Ali Nasir, claimed to have paid Moi US$2 million in cash to obtain government approval for the World Duty Free Limited investment in Kenya.

On 31 August 2007, WikiLeaks published a secret report that laid bare a web of shell companies, secret trusts and frontmen.

Wikileaks said that his entourage was used to funnel hundreds of millions of pounds into nearly 30 countries. 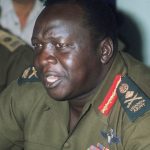