What informs the clamor to replace the Executive Presidential system by a Westminster Parliamentary system of government is parochial interests.

It is about expansion of the top leadership to increase inclusivity by sharing posts. The focus of the proposed amendments in the anticipated national dialogue begins with power sharing structure.

In fact the social problems that bedevil Kenya are the results of defective politicians who get away with impunity.

Some bigwigs enjoy opulent lifestyles in Government. It has become their sense of entitlement. They feel left out in the cold whenever they fall on the losing side.

Even when they win, they want more people at the top to reflect their support base. Which makes no sense in a devolved system of governance together with Independent Offices. And Commissions that can accommodate their relatives and friends.

History has shown that party bigwigs reserve posts for the privileged relatives and friends of party bigwigs. For example how NASA shared the East African Legislative Assembly (EALA) slots.

Most Ambassadors/High Commissioners are former cabinet secretaries. One reads the ‘sense of entitlement’ for relatives and friends of party leaders. To be in Government employment at public expense, regardless of the political divide.

It is not that we lack other qualified and more deserving Kenyans to occupy these positions. This anomaly has nothing to do with the Constitution.

It is, purely, flawed politics. Devolution sorted out the issue of inclusivity. Our focus should be on legislation on devolved units. To prevent devolving this ‘sense of entitlement’ to County Governments. In order to realize inclusivity at this level. There has to be a representation of all resident tribes, sub-tribes, clans, sub-clans and family units. In the execution of community projects and programmes.

People who lose at the national level should accept and go back to the drawing board. And, patiently, wait to have another shot in the next elections.

It is a better way of holding the winners responsible and accountable for their actions. That is the role of the losing side.

The Constitution is, surely, not perfect. However, the open electoral injustices witnessed in the political arena cannot be, wholly, attributed to deficiencies in the Constitution.

It is the flawed political leaders and appointees in the Independent Commissions and Offices that are the culprits.

Politicians from both sides of the political divide want to have their way. And say at the same time, which is impossible unless we want anarchy.

Appointees to Independent Commissions and Offices succumb to the wishes of political camps. To do their bidding instead of adhering to their oath of office. To serve all persons, equally, without fear or favor.

The Appointees, more often, tend to serve the Appointing Authority. Even in cases where it is not in the public interest.

The reactions to the annulment of the results of the August 8, 2017 Presidential Election is a case in point.

Jubilee cried foul and described it as a judicial coup. NASA praised the judiciary’s impartiality and fidelity to the Constitution.

The tide reversed in the two camps. When the same Supreme Court upheld the results of the October 26, 2017 Presidential Election.

NASA said that Judges were intimidated to legitimize a sham election. Jubilee rejoiced that they had been vindicated and their win had been legitimized.

The Presidential System is working in South Africa, Nigeria and Ghana. Because the people and political players defend the Constitution and respect the rule of law.

It is about tumbocracy in Kenya. This is the cause of suspicion. The Constitution and the law are only respected when they favor particular positions.

We have, deliberately, ignored to acknowledge that the law is a sword that cuts both sides. Today, it will favor you and tomorrow will be my turn to benefit from it.

Let us cultivate trust in our institutions. By ensuring that the integrity of Appointees entrusted to run them is beyond Caesar’s wife.

Let them be independent as envisaged and run by qualified people of impeccable record and integrity.
For now, let us live with the Constitution as it is. We need to abide by its Leadership and Integrity chapter.

We are the people at fault, not the presidential system of governance. Only certain people’s political interests should not be the driving force for amendments.

There is no guarantee that the same politicians will obey the new system. We put new wine (Constitution) into old wineskins (same political drivers). 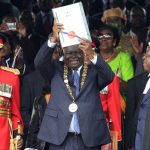