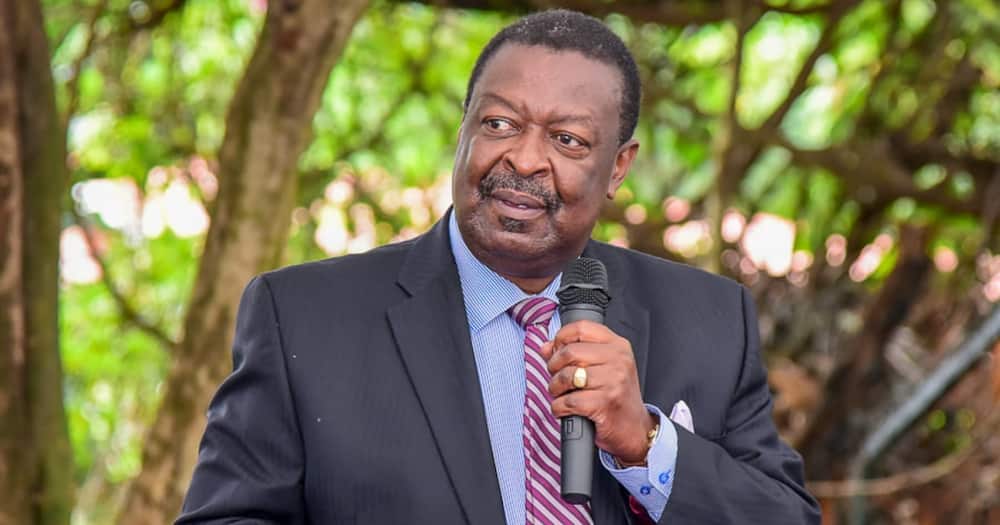 Wycliffe Musalia Mudavadi (born 21 September 1960) is a Kenyan politician and land economist. He is currently serving as the Prime Cabinet Secretary of Kenya.

Nominated by His Excellency William Samoei Ruto, President of the Republic of Kenya. He is also the party leader of the Amani National Congress (ANC);

One of the founding political parties, of the Kenya Kwanza Alliance (KKA)/Government. He served as the 7th Vice-President of Kenya in 2002 and Deputy Prime Minister (2008 – 2012 May);

When he resigned to contest for the Presidency in the 2013 Kenyan general election and emerged third. He was the deputy party leader of the Orange Democratic Movement (ODM) (2005 – 2012);

Mudavadi, is from Quaker Christian denomination family. He is of the ethnic Maragoli dialect, an extract of the populous Luhya community of western Kenya.

After his late father Moses S. B. Mudavadi, he is the only other Kenyan politician who does not swear Oaths of Office;

Because his faith forbids it. His staunch Quaker upbringing is the reason for his disciplined and pragmatic approach;

That has earned him the moniker of “the gentlemen of Kenyan politics’ and “Safe Pair of Hands” in Kenya’s often chaotic vibrant political scene;

Where he easily attracts trust. He is notoriously honest, and respected for his near pacificism, in terms of clean politics.

He pays strict adherence to speaking the truth at all times, use of plain language and dressing, and has aversion to war and violence.

Mudavadi schooled at Nairobi Primary School, then Jamhuri and Nairobi School for his A- levels and the University of Nairobi.

He pursued a Bachelor of Arts(Land Economics) degree.

For sports, he played rugby as a winger for his high school and university’s Mean Machine RFC where he earned the nickname “Phantom” for his agility, speed and dexterity on the field.

In a by-election to take the Sabatia Constituency seat vacated by his deceased father Moses Mudamba Mudavadi. He went on to win the seat in 1992 and 1997 general elections.

In addition, he has served as Vice-President (2002) and also Deputy Prime Minister and Minister for Local Government of the Republic of Kenya (2008 – 2013).

In late 2002, Mudavadi was the last and shortest serving Vice-President of Kenya under President Daniel arap Moi.

Mudavadi got appointed, unsuccessfully to bring the then Western Province votes into the camp of KANU;

Which had been the part of government since independence. Mudavadi ran as Uhuru Kenyatta’s running mate in the 2002 election.

Despite the support of incumbent President Moi; the Kenyatta/Mudavadi ticket was roundly beaten by Kibaki/Wamalwa. And Mudavadi lost his Sabatia parliamentary seat.

Soon after he was appointed Minister of Supplies and Marketing until 1992. When he was elevated to the Ministry of Finance between 1993 and 1997.

He was appointed VP in 2002 to replace the late George Saitoti. Who Moi had sucked in a succession war after he chose Mr. Uhuru Kenyatta as his successor.

In 2005 Mudavadi made a political comeback by joining Raila Odinga’s Liberal Democratic Party ( LDP) and aligning himself with the ‘No’ side in that year’s Referendum;

On the proposed new Constitution amidst speculation that he was set to become the leading Luhya politician.

After the 2005 referendum, the “No” side formed the Orange Democratic Movement- Kenya (ODM-K). But after the ODM-K split;

Mudavadi joined the Orange Democratic Movement (ODM) where he rose to the Deputy Party Leader. In 2007 Mudavadi sought the nomination of the ODM;

As its candidate for the December 2007 presidential election. On September 1, 2007, Mudavadi came second with 391 votes to Odinga’s 2,656 votes in a disputed nomination process.

However, along with the other defeated candidates, Mudavadi supported Odinga and was named Odinga’s running mate for the election.

Although the election was officially won by Kibaki, ODM disputed the official results and claimed victory for Odinga.

A violent crisis developed, which eventually led to the signing of a power-sharing agreement (National Accord) between Kibaki and Odinga.

Time in the Grand Coalition Government

As part of the grand coalition government, Mudavadi was named as Deputy Prime Minister and Minister for Local Government on 13 April 2008.

Mudavadi and the rest of the Cabinet were sworn in on 17 April 2008.

In 2012, Musalia Mudavadi sought for the nomination of ODM to be its presidential candidate for the 2013 General Election.

He later on decamped from ODM sighting lack of political freedom in the party. He said the illegal/unconstitutional political mechanisms placed his way;

Made it impossible for any other aspirant to seek a successful free and fair presidential nomination.

Unfairness in the ODM Nominations

Mudavadi left ODM after he was technically locked out of the nomination race through a party constitution clause; that gave the party leader a direct nomination as the presidential candidate.

Musalia, however, refused to resign as the Deputy Prime Minister of the Republic of Kenya citing that the office was a public and not a party office.

He later took over the United Democratic Front Party (UDF) and became its flag-bearer for the presidential election.

Briefly, he joined Uhuru Kenyatta and William Ruto to form the Jubilee Coalition bringing together UDF, URP and TNA parties.

However, Mudavadi left the coalition after a breach of contract which had stated that Uhuru Kenyatta would step down in his favour;

As the presidential flag-bearer for the UDF/TNA/URP Jubilee coalition. Uhuru surprised the nation by admitting that he indeed signed the agreement but blamed his decision to renege on “dark forces”,;

Yet the breach of agreement resulted from fierce objection by Uhuru’s supporters insisting that he must be on the presidential ballot.

But earlier, Uhuru had insisted that nominations had to be done through voting by party delegates. Mudavadi objected saying the joint candidate;

Had been agreed upon by consensus and that the partners in the Jubilee Coalition; were new and didn’t have bonafide delegates selected through grassroots elections.

Mudavadi made a solo run on UDF and came a close third for top leadership in the country in that election. After the 2013 elections, elements within UDF begun a disruptive scheme;

To mortgage the party to the ruling Jubilee Coalition. In July 2015 Mudavadi abandoned UDF, which was later dissolved.

He formed the Amani National Congress (ANC) that would take him to the presidential race come 2017. Keenly aware of the configuration of Kenyan elections;

NASA settled on Odinga as its presidential candidate. Mudavadi was the only principal of the NASA not to stand for an elective seat in 2017 general election as he settled for NASA campaign chairman.

After the 2017 General Election, the NASA presidential candidate Raila Odinga decided to swear himself in. Musalia refused to be part of the mock swearing-in terming it unconstitutional.

On March 9, 2018, Odinga had signed an armistice handshake with President Uhuru Kenyatta. Since 2018, Mudavadi chose;

To remain the Opposition figurehead of Kenyan politics and more vocal talking about Kenyan’s economy and the impact of the huge public debt.

In March 2021 Mudavadi strategically aligned with the other two NASA Principals Kalonzo Musyoka and Moses Wetang’ula;

And KANU Chairman Gideon Moi, to form the One Kenya Alliance (OKA) after three consecutive by-elections wins by their respective parties.

Among the three, Mudavadi had been the more active traversing the country to popularize his presidential bid under the mantra of Uchumi Bora, Pesa Mfukoni (Swahili for – Better Economy, Money in the Pocket).

He spoke constantly against the dwindling economic fortunes of the country, negative impact of high cost of living and high taxes to the ordinary Kenyan.

Towards the end of 2021 he became despondent with what he called President Uhuru putting OKA in an “abattoir for political slaughter”.

In December 2021 he addressed the nation and promised to be “extremely unpredictable” in the build up towards the 2022 General Election.

In January 2022 he caused a metaphorical political “Earthquake” changing the county’s political trajectory.

The moment occurred on January 23, 2022, when Mudavadi accepted the presidential candidature nomination by the ANC party;

And resolved to work with Deputy President Dr William Ruto who was the chief guest at the ceremony. Mudavadi was very articulate in his announcement, terming the coming together as an “earthquake”.

He told Kenyans that the time to be deceived was far gone and as a leader, he will not allow that it to continue.

By using the phrase “tusindanganyane” (Swahili for – “let’s not cheat each other”), Mudavadi called on Kenyans to rise up and save the country from a looming danger.

Mudavadi went ahead and supported the presidential candidature of the Deputy President William Ruto and they won the August 9, 2022 General Election;

Against Raila Odinga who had the support of incumbent President Uhuru Kenyatta and the State machinery, in a comfortable majority;

Under the Kenya Kwanza Alliance (KKA) that he had formed quietly while still in OKA. He, is slowly gaining recognition as the master of forging political alliances in Kenyan politics.

The docket makes him Kenya’s third individual to hold a similar position after the first Prime Minister Jomo Kenyatta (1963) and second Raila Odinga (2007 – 2013).

Mudavadi protested his innocence and said KACC was being unfair by accusing him without giving him a chance to be heard.

In June 2020 according to court records as reported by the Daily Nation, Mudavadi did not benefit from cemetery land deal thus was not culpable in the scandal.

In January 2012, the Law Society of Kenya (LSK) listed Mudavadi as one of the public officials mentioned adversely in various reports on issues ranging from corruption to economic crimes.

Issues with the LSK

The LSK advised voters not to vote those mentioned in the report as they had previously been compromised. According to LSK;

The time Mudavadi was blacklisted was a time of a veiled blanket allegations against the Kibaki administration officials such as;

Former President Mwai Kibaki, William Ruto, Charity Ngilu, but without specific allegations levelled against any of them.

Thus, the LSK listing was found to have no specific accusation that Mudavadi was culpable to warrant the blacklist.

Mudavadi is married to Tessie Mudavadi and they have three children; Moses, Michael and Maryanne. Mudavadi is a fan of English premier league football team Manchester United;

And Kenyan premier league side AFC leopards. He once served as a patron of AFC leopards. In addition, he is also a golf and rugby enthusiast.

He has an autobiography published in 2019 entitled “Musalia Mudavadi: Soaring Above The Storms of Passion”.

His nickname in the Kenyan political arena is Mdvd aka Earthquake. In addition, Mudavadi is an ardent fan of old school country music with Kenny Rodgers and Dolly Parton being his favourite musicians.