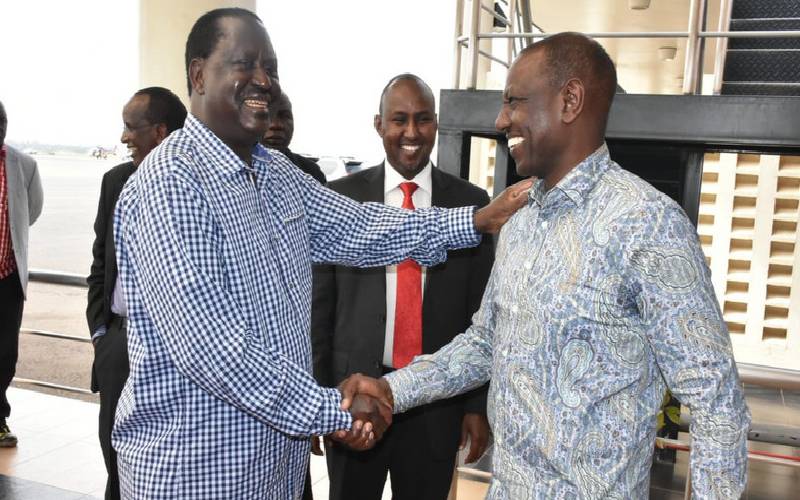 It’s Ruto’s propaganda to send the message to the Mulembe nation that OKA is inconsequential in the Uhuru succession matrix. The two-horse mantra.

He’s Deputy Party Leader of the Jubilee Party. Yet, he shamelessly cajoles the OKA duo to back him in a UDA party he’s not a member. He can’t have his cake and eat it.

That’s conmanship. Mudavadi has no reason to play second fiddle to Ruto. Ruto’s cajoling of the OKA duo should be dismissed with the contempt it deserves.

Agreed. Mudavadi joining UDA is just the paper’s hypothesis. However, it’s a caution to Mudavadi on Ruto’s intentions. To send Mudavadi to political Siberia for good.

Ruto can’t be deputized by another tribal kingpin. That’s why he’s surrounded by a sycophantic greenhorn.

Media reports on 2022 General Elections have one common denominator: propaganda on the two-horse race. The newspapers have been compromised to dismiss OKA principals in the Uhuru succession matrix.

It’s clear the editors love the status quo in Kenya’s political landscape. The media has the upper hand and is most trusted by the electorate in marketing aspirants.

With this kind of media leadership, Kenyans will continue recycling populist politicians in elective positions and will never see CHANGE in the high cost of living for the better.

Raila and Ruto use the media to employ the divide and rule tactics to sustain the two-horse race talk. The headlines aren’t news.

They’re suppositions and speculations to intimidate OKA principals to throw in the towel in favor of either of them.

It would affirm their creation of the two-horse race mantra. It’s Raila and Ruto propaganda war to render OKA principals irrelevant in the succession race.

It proves OKA is a big threat to the two horses. The charm offensive targeting the OKA duo is calculated to give the impression of a vacuum of leadership in the Mulembe nation for either Raila or Ruto to occupy.

There’s no vacuum of leadership in the Western Region. The acts of the two horses are demeaning and contemptuous of the Mulembe nation.

The OKA underdogs should turn this perceived weakness into strength by sticking together and agreeing on the flag bearer.

The Mountain will then determine who of Raila or Ruto will make it to the run-off with the OKA candidate. Raila is deceived that amorphous elders appoint kingpins in the Mulembe nation.

No meeting was held to decide on Masinde Muliro, Moses Mudavadi, and Kijana Wamalwa as undisputed leaders of the Region during their time.

Even Raila himself isn’t a product of the elders’ choice in Nyanza. Francis Atwoli is just egocentric and full of self-importance and obsessed with the limelight that goes with installing the unelected Western kingpins.

Political leadership is never forced on people. It’s the leader’s people-centered actions that bestow the regional leadership title by perceptions, devoid of inauguration.

I still advise that Raila approaches the OKA principals in person to avoid the impending waterloo in August.

Bukhungu Stadium has a capacity of about 20,000 people, while the Region has 2.3 million registered voters (2017), including TransNzoia County. The Bukhungu II was a Raila endorsement under ALUM where only Raila supporters and others out of curiosity attended.

Skipping the Bukhungu II meeting doesn’t mean the end of the road for the OKA principals. On the contrary, attending would be like taking an oath to support Raila, which would have ended their presidential ambitions for the 2022 race.

The behavior of Malala and Savula became predictable when they gave the OKA principals until December 25, 2021, to unveil the flag bearer.

The two MPs are each looking at chances to clinch the Kakamega gubernatorial seat. Their actions have very little to do with Mudavadi’s presidential ambitions.

Whichever formation they will ride on to clinch the governor position is their only concern. It boils down to self-interests where their success in politics is an end in itself for them even when it’s valueless to the electorate and country.

“I have been in the media lately, more for what I have not said than what I have said,” Mudavadi said (The Star, January 07, 2022). This confirms my views of propaganda on the two-horse race. There’s no way Mudavadi will play second fiddle to Ruto.

He’s more experienced with more voter numbers than Ruto. Mudavadi is a leader while Ruto is a politician. Unlike OKA with multiple candidates for the presidency, UDA has no presidential candidate.

It’s waiting for the only presidential material, Ruto, to decamp from JP to lead it. Without heavyweights around to challenge him, Ruto has the traits of turning into a dictator fast.

He’s a lone ranger and egocentric. That’s why he uses public rallies to woo OKA principals in a dismissive and demeaning manner, lying that he seeks permission to campaign in their backyards.

Raila has exposed himself as a divide and rule man in every election since 41 against 1 campaign of 2007.

He cajoles his regional partners and betrays them by dishonoring agreements on the pretext he didn’t catch the prey.

Yet, he only scores off-side goals but can’t relinquish the striker role to others. Instead, he deceitfully dumps them and resorts to fishing for new ones to replace erstwhile friends.

It’s a divide and rule tactic. He causes disharmony in regional leaderships. The formation of ALUM as his new vehicle to State House is confirmation of his untrustworthiness.

The mistrust informed the political parties Coalition Bill being hurried in Parliament. Junet’s disclosure about the imminent Raila presidency rattled leaders and sent shivers in the Mountain, worsening Raila’s chequered history in Coalitions.

The Mountain mooted the Bill for fear that ODM would act big brother again once Raila settles in State House. The Bill tames him in advance if he wins the presidency.

He, now, can’t run away from the tag of State project. He’s no longer the Enigma we knew. He’s caged. He comes in as MKF sponsored presidential candidate and will have to sing the Mountain tune or taste his own medicine of making the country ungovernable.

The Mulembe nation had a serious presidential candidate in OKA. It’s time Raila and Ruto accepted the fact and respected it.

They’re welcome for peaceful solicitation of votes, without the undignified notion that there’s a leadership vacuum in the region waiting to be filled by either of them.

Neither Raila nor Ruto has a better record in the public service than Mudavadi. They shouldn’t turn the Mulembe nation into a hunting ground for votes in assuming positions.

It’s just a friendly Region that embraces peace (milembe) and shouldn’t be confused with cowardice. 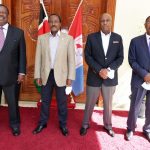 The OKA principals were not true to the fact that they were not having coalition talks as Ruto hit out at Mt. Kenya tycoons