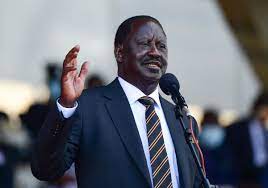 Odinga and his running mate Martha Karua August 22 filed a petition to the country’s top court, challenging the outcome of the August 9 election.

In a recent press conference, Odinga reaffirmed his confidence in the Supreme Court ruling despite saying that he won the just concluded presidential election.

Odinga said he had proof that he had won the election, which requires a candidate to receive 50% of the vote plus one. He wants a recount.

The 77-year-old politician lost his fifth bid for the presidency by a narrow margin of around 230,000 votes — less than two percentage points.

Since 2002, no presidential election in Kenya has gone uncontested, with this year’s outcome also causing a rift within the Independent Electoral and Boundaries Commission (IEBC) which oversaw the poll.

According to a copy of the 72-page petition seen by AFP, Odinga’s team alleges that IEBC chairman Wafula Chebukati failed to tally around 140,000 votes.

As a result, Ruto “did not meet the constitutional threshold of 50% plus 1 of the valid votes cast” — a requirement for him to be declared the winner.

Judges now have less than a week to issue a ruling. If they order an annulment, a new vote must be held within 60 days.