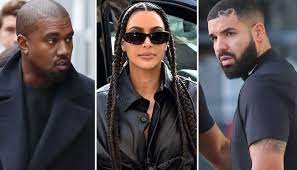 The 41-year-old diva turned to her Instagram to promote her new SKIMS alongside a song from rapper Drake.

The mother-of-four captioned her photo: “Put her Skims on, now she actin’ like she Kim,” as she refers to the song More M’s

Commenting on the post, fans were quick to brew up a romantic link between the two.

“See Drake is helping with that advertising,” one noted.

“New romance? I think so!” added another.

“Kanye [is] in shambles,” quipped another.

The star shared a screengrab of the lyrics from the hip-hop artists Drake and 21 Savage’s new single More M’s.

They read: “Put her Skims on, now she actin’ like she Kim.”

Kim also captioned the entire post with the lyrics from their recent release, Her Loss.

Titled, “See Drake is helping with that advertising,” more fans rushed to the post’s comment thread to give their take on Kim referencing the platinum-selling artist.

One person wrote: “New romance? I think so!”

A second commented: “Kanye is going to lose his s**t,” while another added, “Kanye [is] in shambles.”

Around the same time those reports surfaced, Drake’s fans speculated that he dropped a hint about sleeping with Kim behind Kanye’s back.

In the song Wants and Needs, he rapped: “Yeah, I probably go link to Yeezy I need me some Jesus. But as soon as I start confessin’ my sins, he wouldn’t believe us.”