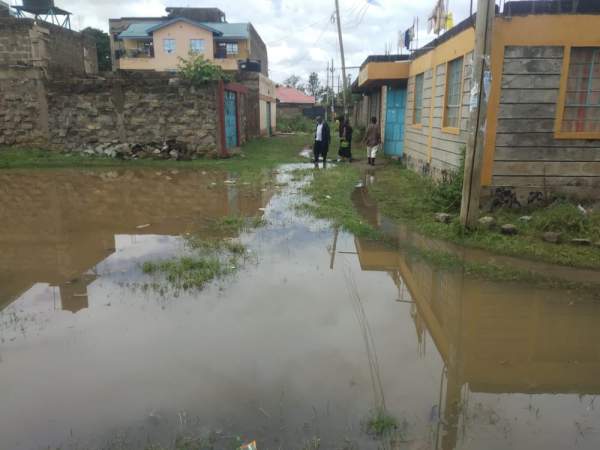 Several families in Kisii estate in Thika, Kiambu County will be forced to seek alternative areas to shelter after heavy rain wreaked havoc in the area, flooding their homes.

The last few days heavy downpour that has been witnessed in the area have destroyed properties worth millions of shillings.

According to them, poor and old drainage systems are the major cause of flooding in the area.

They noted that flooding in the area is a perennial crisis they ought to have addressed a long time ago.

They said that they filled several complaints to both the National and County governments to address the issue but all have fallen on death ears.

“Most of our businesses are now flooded and items therein destroyed. We have lost stock and can not even open the stalls to salvage what has remained,” another local added.

They claimed that cases of Arthritic have been on the rise due to the severe cold in the area.

Parents noted that the raging waters on their children’s way to school forces them to skip school.

The residents are afraid they might contract various diseases including waterborne diseases such as Typhoid and Bilharzia.

To solve the problem, the residents have vowed to fundraise to enable them to construct modern drainage systems.