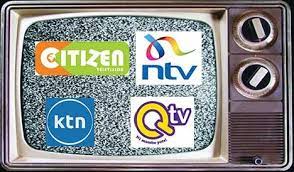 Churchill show is one of the oldest and most watched Kenyan TV shows in East Africa. The show airs on NTV by the famous Daniel Ndambuki.

It used to be recorded live at Carnivore grounds but recently it has been moved to various places in Kenya.

Churchill show was first performed in 2007 and it has grown to a full laughter industry.

This Kenyan show aims at promoting the talents of comedians featuring people like; professor Hammo, MC Tricky, Eric Omondi, MC Jessie, among others.

It also promotes other people with different talents like artists.

Selina, is a Kenyan Swahili soap opera and telenovela that airs on Maisha Magic East on Gotv channel 4.

This is a big show too as we all know it which airs on Citizen T.v every Wednesday at 09:30 PM.

Jeff Koinange with his husky voice digs in deep for answers to alot of political questions that remain unearthed.

With superb panelists, he gets the best for his vast audience through hos show which was formerly being aired on KTN.

One of the hottest reggae and dancehall show in the country airing every Saturday from 10:00p.m-1.00p.m.

The show hosted by Talia Oyando and Dominic Kariuki, aka Coco Sobo, appeals to many viewers, especially the youth.

They play and dance to the hottest reggae songs and invite popular musicians like, Vybz Kratel, Konshens and Ricky Blaze.

If you are looking to be up to date on what’s trending in the fashion, entertainment and politics scene, the trend is the show to watch.

The show hosts a variety of guests for interviews on various trending topics in the country.

The trend is aired every Friday night on NTV by Amina Mohammed.

It is one of the Kenyan favorite Friday evening show. Its host is Dr. King’ori on NTV.

Wicked edition is an issue-based comedy where different people with different experiences in life share their stories.

This is a controversial show hosted by Willis Raburu on Citizen TV every Friday at 10.00 PM.